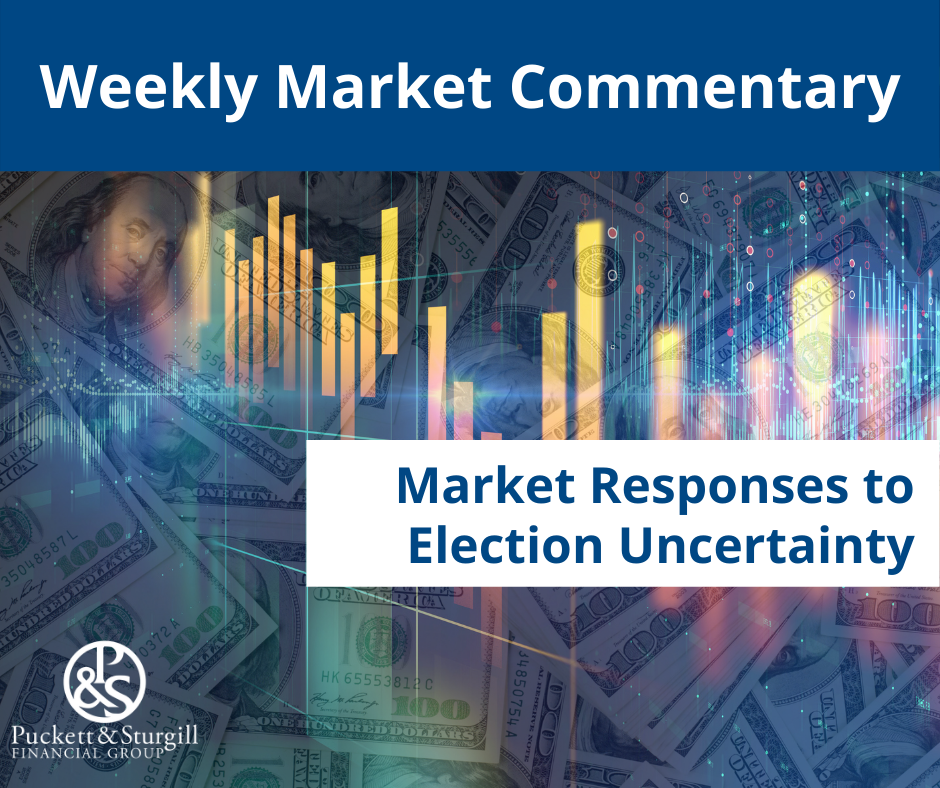 Speculation has been increasing that the November election results may be delayed or disputed, or both.  A contested election might affect financial markets in several ways. Also, the news that President Donald Trump has tested positive for COVID-19 may potentially impact markets as well.

While this Weekly Market Commentary was in production, we learned that President Trump and First Lady Melania Trump had tested positive for COVID-19. First and foremost, we wish the president and first lady a swift and full recovery. Obviously the news adds a layer of uncertainty to an already contentious election cycle.

The immediate market response has been relatively mild so far. US stocks were lower at open the morning of October 2, but some assets that are perceived to be more resilient in the face of a risk-off environment, such as Treasuries, gold, and the Japanese yen, have shown no real sign of added strength early on. The news adds to the election uncertainty, however. Trump will be unable to campaign in person during the quarantine period that he observes—and maybe longer if he exhibits more serious symptoms—which possibly could hurt his reelection chances. On the other hand, the United Kingdom’s Prime Minister Boris Johnson saw his approval rating rise while he was fighting the infection.

From a market perspective, we think it’s better not to speculate on the election impact of the diagnosis. We do know two things: 1) The response to COVID-19 is very different from case to case, which means only time will tell how the virus may affect the president, and 2) the president and first lady will be monitored closely and will have access to some of the best care in the world, which improves the outlook for both of them.

Why the Odds of Election Uncertainty are Elevated

The election may be close, especially if the president is able to make a quick recovery from the virus. Looking at recent election history, the United States has been nearly evenly divided along partisan lines, and the Electoral College may make the difference between the candidates even smaller. Over the last five presidential elections, the difference between the two candidates in the popular vote was less than 5% four times, and in two of those cases the winner in the Electoral College had lost the popular vote. Despite these close elections, market impact due to a delayed outcome has been limited.

In addition, we’re facing the challenge of holding an election during a global pandemic, which may change the way many voters cast their ballots. Voting methods already have been shifting for years. Only about 60% of all voters who cast a ballot in 2016 voted in person on Election Day, according to the US Census Bureau. The rest voted by mail or used early voting. The number of people voting in person may be significantly lower in 2020. In fact, nine states are using mail-in voting almost exclusively this year. There also may be logistical problems or long lines at neighborhood polling places due to safety protocols, as we saw in some primaries. Together, these challenges increase the possibility of post-election uncertainty.

Finally, Trump has stated that he has concerns about the voting process and the election may need to be settled in the courts. Both Republicans and Democrats are preparing for that possibility and most likely will have an army of lawyers at the ready. Since 1876, we have had only two elections close enough to effect real challenges. In 1960 the challenge fizzled quickly. In 2000 there was a smooth transition of power after a Supreme Court decision ended a recount dispute [Figure 1]. 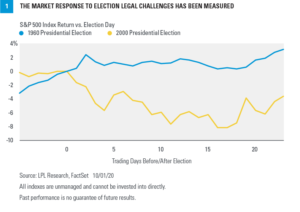 Considering all of this, our base case remains that the election will move relatively smoothly toward an outcome recognized as legitimate by most Americans. In the case of a delayed or disputed outcome, however, there are three key scenarios that we believe reflect how financial markets might respond.

Scenario #1: Delays Due to the Time it Takes to Count the Votes

With a larger portion of the population using absentee or mail-in ballots, it may take time to create an official tally, which may delay media outlets being able to call a winner until after Election Day—although most likely it will be called within a day or two. In addition, according to the PEW Research Center, more Democrats prefer to vote by mail than Republicans, which possibly may lead to an early lead by Trump as Election Day draws to a close in some states, only to then be surpassed by Biden when mail-in votes are processed. There may be some political posturing as the vote is counted, but we think the market impact would likely be negligible in this scenario. However, there may be a degree of voter anxiety that accompanies political pressure to expedite the counting process.

If there is a recount in a close election or charges of fraud in closely contested states, legal challenges may arise and lead to heightened political tensions. In this scenario, broad equity indexes potentially could decline by roughly 5–10%, largely due to the perception of some risk of a more serious escalation. We believe a post-election market dip would likely prove buyable as disputes move toward resolution via established institutions.

The most comparable historical example is the 2000 election, when a recount in Florida to decide the election led to legal challenges by Democrats. In 2000, the peak decline in the S&P 500 Index from Election Day until former Vice President Al Gore conceded the election was just over 8%, as shown in Figure 1.

The election outcome was also contested in 1960 with legal challenges in several states; however, the challenge wasn’t strong enough to rattle markets, which shows the bar may be fairly high for any dispute to have a market impact. Even in the 2000 election, the catalyst for the market declines isn’t completely clear, as the election took place in the early stages of the bear market that followed the tech bubble, and that may have contributed to equity weakness.

If the uncertainty caused by scenario #2 were to escalate without a path to resolution, the polarized nature of our political environment and the already fragile state of the economy may prompt the market to price in the potential business risks of government dysfunction, causing a correction of 10% or more. We must emphasize that we believe this to be the least likely outcome of the election.

The best analogy for the type of disruption this may cause is not an election, however, but Standard & Poor’s 2011 downgrade of US government debt after partisan politics came very close to forcing the United States to default on its debt. Part of Standard & Poor’s rationale for the downgrade shows the potential similarity of the scenarios: “The downgrade reflects our view that the effectiveness, stability, and predictability of American policymaking and political institutions have weakened at a time of ongoing fiscal and economic challenges.”1 For election uncertainty to cause serious market disruption, it would likely have to rise to this scale.

Two dates mark key lines in the calendar for resolution of election results. Electors of the US Electoral College will meet December 14, 2020, in their respective state capitols to formally cast their votes. On January 6, 2021, the Senate and House will convene to count the electoral votes. Any uncertainty at these points would almost certainly create a legally contested election that’s more serious than a recount. In 2000, the Democratic Party and Gore pursued legal processes. However, these were resolved in a timely fashion prior to electors casting their votes, and there was a smooth transition of power as scheduled.

We empathize with concerns about a hotly contested election result. However, we think it’s important to differentiate the political impact of election uncertainty from the market impact. In most cases, despite the possibility of some market disruption, we believe the stock market will be forward-looking and see past the period of uncertainty. While there is a fair chance that the election result may be delayed slightly, we expect the strength of our political institutions to prevail, for the election outcome to be determined fairly, and for a timely transition of power. Even if the process is bumpier than expected, market risks will likely be tempered unless there’s a political breakdown that threatens lasting damage to the economy or corporate America, and we’re a long way from there.

Please read the full Midyear Outlook 2020: The Trail to Recovery publication for additional description and disclosure.