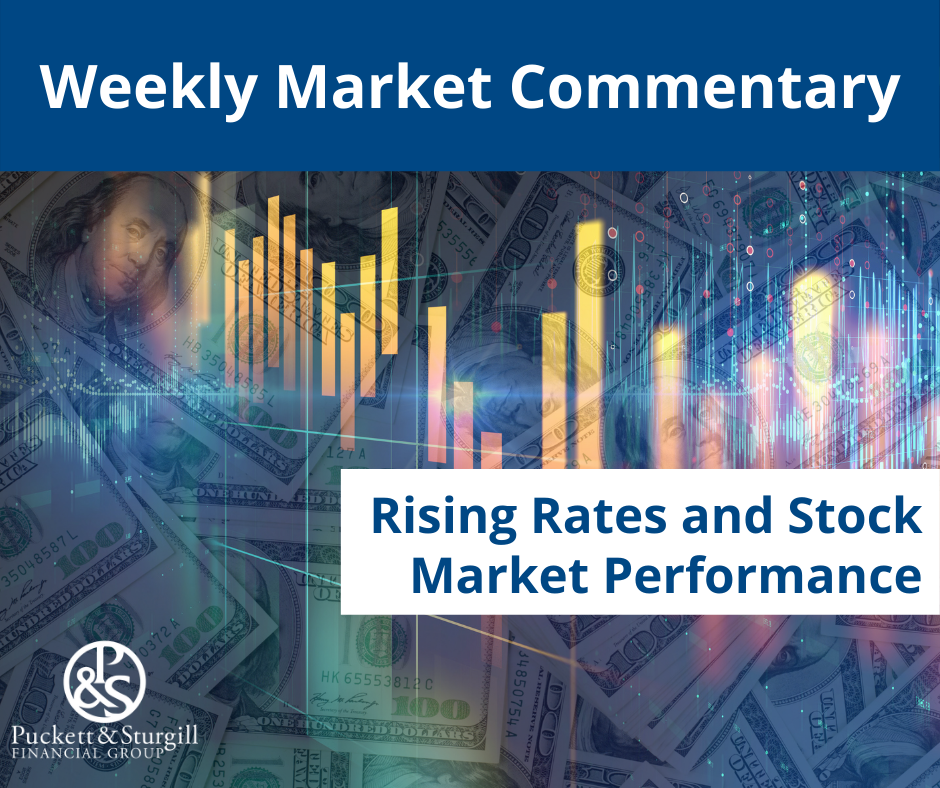 The 10-year Treasury yield continues to climb higher, but remains low by historical standards. Still, the size of the move since July 2020—and the more recent acceleration—has some market participants worried about the potential impact on stock markets if rates continue to rise. Historically, the S&P 500 Index has endured extended periods of rising rates well. If an improving growth outlook is part of what’s driving rates higher, it should also support corporate profits, creating a positive fundamental backdrop for stocks.

Bond yields have been on the move lately, but stock prices have also been rising. And while some market participants are expressing increased concern that rising bond yields may begin to weigh on stock returns, stocks have usually been resilient in rising rate environments. 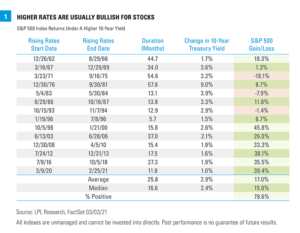 How markets have performed during a rising-rate period has depended heavily on what’s going on in the economy, with inflation a leading consideration. Rising rates during periods of high inflation have generally resulted in lower stock returns, although the level at which inflation has become a headwind is well above what even most inflation hawks expect now.

From 1968 to 1990, the Consumer Price Index (CPI) rose an average of 6.2% per year and was above 3.5% every year except three. Five of the rising rate periods in [Figure 1] took place at least partially during those inflationary years. The average annual return during those rising-rate periods was -0.4%. During all other rising-rate periods, the average annual return was 13.0%, well above the average for all returns since 1962. While inflation expectations are rising right now, CPI growth of even 2.5% at the end of the year would be an upside surprise based on the median estimate of Bloomberg-surveyed economists. For all the concerns about inflation, we are a long way from the ‘70s and ‘80s.

A Steepening Yield Curve Has Been a Good Sign

The yield curve is the difference between long-term and short-term interest rates. A steepening yield curve usually tells us two things: economic growth expectations are picking up, pushing long-term rates higher; and the Federal Reserve (Fed) probably is not yet pumping the brakes, helping to keep short-term rates relatively low, which usually also means inflation is under control.

While yield curve steepening has not yet been dramatic enough to make its way into the top four periods historically, we have seen considerable steepening already. With the Fed likely on hold for some time, anchoring the short end of the curve, we expect that if rates continue to rise, it will come with further steepening. Some of that may be because of rising inflation expectations, but the main driver is likely to be an improved growth outlook.

Rates have been rising but they are still historically low, with the 10-year Treasury yield at the end of February falling into the bottom 2% of all values dating back to 1962. While it’s true that rates become a bigger burden for business, consumers, and governments as they rise, even at current and higher levels rates are still attractive and can continue to support a robust economic rebound.

Looking back again at the different rising rate periods, during the four periods with the highest initial 10-year Treasury yield, the S&P 500 averaged a 2.5% annualized return, while those with the four lowest initial yields averaged 15.4%. A lower initial yield likely reflects manageable inflation and a Fed that isn’t tightening, but it also represents the added economic support of a still low cost of borrowing even as rates rise.

Rising interest rates have clearly been one of the reasons the S&P 500 has consolidated since hitting its last all-time high on February 12, but it’s important to look at the bigger picture. Rising rates in general have not prevented stocks from advancing and the current environment improves the odds that stocks will be able to continue to press higher. Rising rates are being driven in part by an improving growth outlook; inflation, while normalizing, is still well below levels that have historically disrupted markets; the Fed remains supportive; and borrowing costs are still historically quite low. Every market environment is unique, but taking our cues from history, the economic fundamentals continue to look strong and the current rising rate picture looks most similar to those periods of above-average stock performance.